An Ingleside-based company has won a grant from the Commonwealth Government for innovative technology to make carbon-friendly steel.

The company, BioCarbon, was awarded a grant for almost $300k to further assist the development of a carbon replacement for coal in the steelmaking process. Newcastle-based steelmaker Molycop attended a meeting at Ingleside, with Federal Assistant Minister for Energy and Emissions Reduction Tim Wilson and Mackellar MP Jason Falinski, to detail their participation in a trial with BioCarbon to replace coal in their steelmaking process for ‘green steel’.

Green steel is the carbon neutral ‘holy grail’ for steelmakers. To produce steel, carbon is required and until now, there have been few options other than coking coal. According to the representatives of Molycop, the expectation is the BioCarbon replacement will be like-for-like for coal, allowing a direct swap and avoiding costly changes to the existing steelmaking process.

BioCarbon is the brainchild of partners John Mellowes and Chad Sheppeard (image above, L-R). Mr Sheppeard said BioCarbon was formed after he sold a previous business and began looking for business opportunities in climate change solutions with Mr Mellowes, who is also Managing Director of Cromer-based engineering company Northside Fabrications. 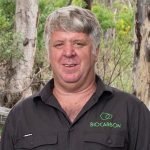 “We were interested in renewable energy and that sort of industry. Then we heard about biochar, which is renewable carbon made from biomass. We started researching that because carbon sequestration was really popular at the time,” said Mr Sheppeard.

During the research and development phase of establishing BioCarbon, Mr Sheppeard said they delved into the chemical process known as pyrolysis, which is a high temperature conversion of biomass into useful compounds of carbon, acid and natural gas.

The pyrolytic process replaces natural decomposition in the environment which releases CO2 into the atmosphere as part of the natural cycle, allowing carbon to be captured and removed, making it a carbon offset. 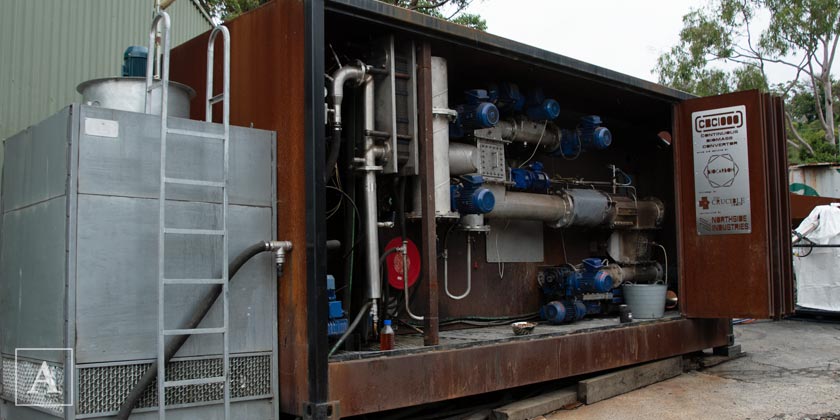 Working with Mr Mellowes’ Northside Fabrications business, they created a prototype machine to turn biomass into component compounds via the pyrolytic process. They began working with Active Tree Services, whose Ingleside facility they are based at, to supply woodchip biomass, which is a byproduct of their business. 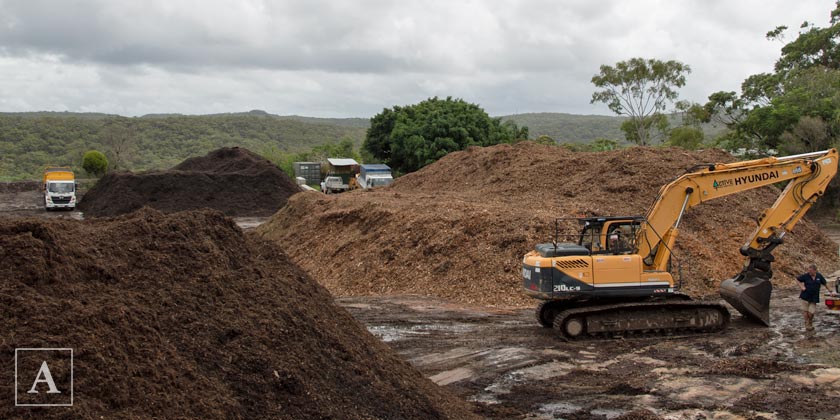 According to Mr Sheppeard, they found the organic acid captured during the pyrolytic process had agricultural applications. The product is known as ‘wood vinegar’, which is already widely used instead of chemicals in Asian agricultural practices.

Mr Sheppeard said the aim is to work within the circular economy and to re-use waste wherever possible, by creating economically valuable products.

“In the process of making charcoal from trees, there’s a liquid product that can be collected called wood vinegar. This is basically an organic acid that smells like a bushfire.

“In Asia, they’ve used that for 100 years in small village scale agriculture instead of chemicals. We’re trying to get into commercial agriculture, broadacre farming, horticulture, where they use a lot of chemicals.

“It’s not a fertilizer and it’s not a pesticide. We’ve got research we’ve done with a university that shows it helps with microbes in the soil. It makes the plants more resilient and delivers more crop yield,” said Mr Sheppeard. The other key product of the pyrolytic process is ‘biochar’ which is almost pure carbon, making it an ideal substitute for coal in steelmaking. Mr Mellowes said a large-scale industrial application would be required for them to take the business to the next stage. 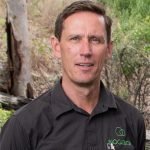 “Biochar has many industrial applications. For us to build a bigger machine, we need more money, a capital injection. That means we need a big customer to de-risk our business plan.

“The product is called biochar if it’s going into soil, it’s very high carbon content, something like 92 percent. We could maybe sell 3,000 tonnes a year to farmers for soil enrichment but if we prove it to steelworks, they’ll take that volume in one go.

“That’s why we’ve gone down this avenue of industrial application first, because we can get one customer to sign off and then we can try and get money to build a new plant,” said Mr Mellowes. 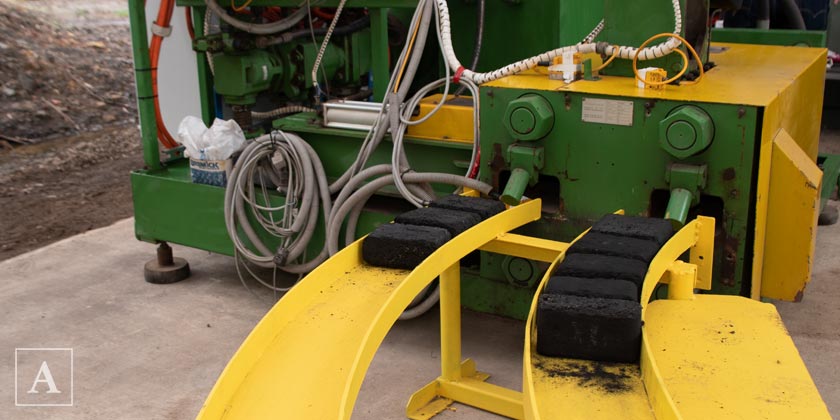 The innovative approach takes biomass product that would biodegrade over two-three years and release CO2 into the atmosphere and stabilise it for storage in soil for hundreds or thousands of years, or to replace coal in steelmaking.

On that basis, BioCarbon were able to successfully apply for a federal grant of almost $300k from the Commonwealth Government to prove the viability of the product for steelmaking. Molycop Steel Vice President of Global Sustainability Ian Tooze said they were keen to trial it as a replacement for coal.

“The steel industry is one of the greatest emitters [of carbon], responsible for something like eight percent of global emissions, and this is an opportunity to decarbonise steel,” said Mr Tooze.

Handing over the grant with Minister Wilson, Member for Mackellar Jason Falinski said local companies like BioCarbon were leading the way in delivering the technology and industrial processes to help achieve net zero. “This grant will help BioCarbon grow its innovation around green steelmaking while creating local jobs at Ingleside. We have a booming green economy in Mackellar that is only getting bigger, whether it’s the innovation in recycling through The Morrison Government’s ReMade Australia program or funding to install solar panels and battery storage across the electorate.

“This is the difference between talking about getting to net zero by 2050 and doing it,” said Mr Falinski.