A fire broke out at a waste recycling facility at Belrose early this morning.

Just after 4.15am this morning (Thursday, 30 June) firefighters from Fire and Rescue NSW (FRNSW) Forestville Station responded to a report of smoke in the vicinity of the Bare Creek Bike Park at Crozier Road, Belrose.

On arrival, they forced entry through a gate at the bike park and confirmed a significant amount of smoke, calling for additional crews from Gordon and Dee Why Stations.

They commenced searching bushland for the source of the fire and redirected responding firefighters to nearby Challenger Drive. Dee Why firefighters located the source of the smoke was an active, large fire at the Benedict Recycling Centre, with a waste pile approximately 30m x 30m well alight.

The distance of the fire from a source of water resulted in FRNSW Gordon and Forestville crews setting up a relay system to supply their water to the Dee Why pump’s Compressed Air Foam System (CAFS). While FRNSW crews were first on scene to establish initial fire control, the location of the fire was within the response area of the NSW Rural Fire Service (NSW RFS) which also responded with several pumpers and two water tankers from brigades, including Warringah Headquarters, Belrose, Davidson, Terrey Hills, Beacon Hill and Ingleside.

With the fire contained but not controlled, FRNSW brigades were relieved by NSW RFS crews and left the scene shortly before 5.45am.

The fire was deep-seated within a large refuse pile, estimated to be up to 6m in height. With the assistance of heavy machinery and plant operators already at the site, firefighters set about breaking down the pile, spreading it out and systematically extinguishing the fire. 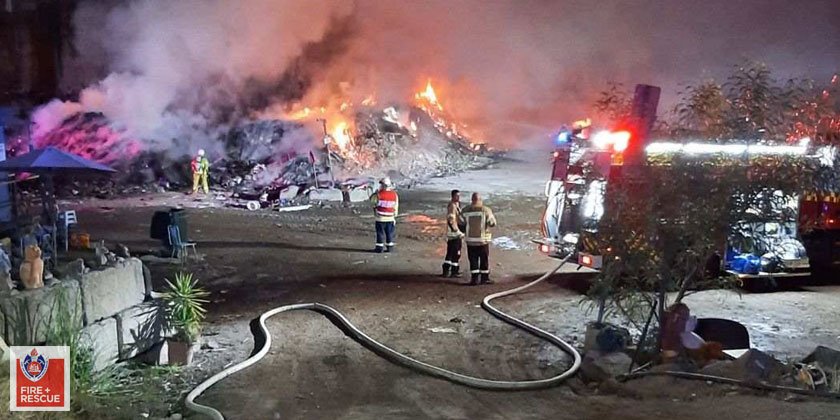 The process of fully extinguishing the fire took several hours, not being completed until just after 11.00am. One RFS firefighter received a minor injury that required first aid treatment but did not require an ambulance.

According to the Benedict Recycling Centre website, the facility does not accept asbestos, alleviating some concern from local residents about possible hazardous materials. The centre was closed today as a result of the fire, but is expected to reopen tomorrow (Friday 01 July).