A Seaforth man on parole has been arrested and charged after a fast and furious car pursuit.

At this time, a blue Jaguar XE, driven by a 35-year-old man from Seaforth, turned off prior to the breath testing site into James Street where further police were situated.

The Jaguar continued past police and travelled the wrong way down Renwick Street, where police engaged in pursuit. The Jaguar was pursued for a short distance, reaching speeds in excess of 100 km/h in the residential areas before having a minor collision with a parked and unattended bus at Chalmers Street, adjacent to Prince Alfred Park (main image and below). 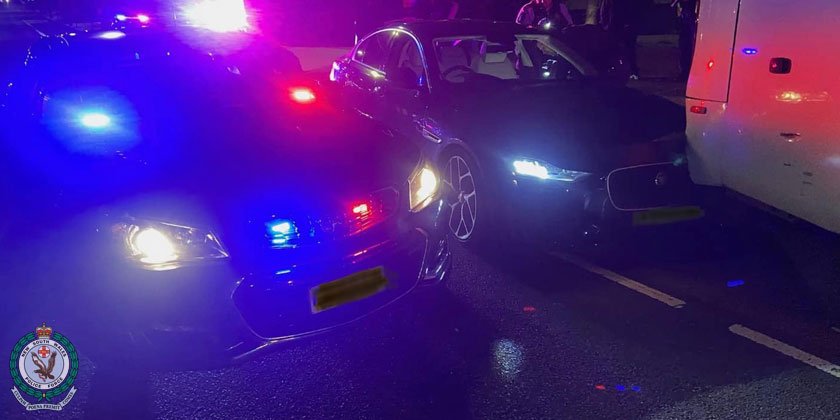 The male driver and sole occupant of the Jaguar XE immediately exited the vehicle and ran into the park where police attempted to arrest him, however, he violently resisted and took some time before being subdued and handcuffed.

The man was conveyed to Mascot Police Station, where he returned a negative breath test. The man was then requested to submit to an oral fluid test and sample, both of which he refused to undertake.

Police checks revealed the 35-year-old male is the holder of a current NSW Learner Driver Licence and was an unaccompanied learner at the time of the incident.

Further police checks revealed the man from Seaforth is currently on parole for a robbery in company offence.

Whilst in custody, the man complained of soreness to his head and he was conveyed to hospital, where he remained under police guard. The man later returned to Mascot Police Station where he was charged for multiple offences for which he was refused bail and is now before the courts.