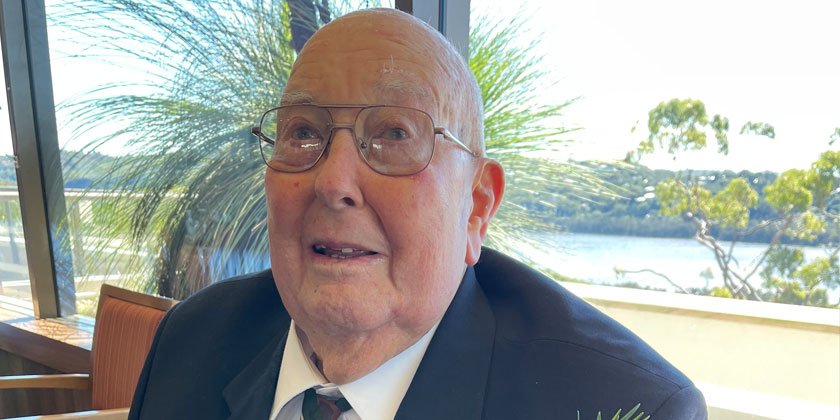 Mr Walter Williams passed away on Saturday, 04 June, at the Kokoda Hostel, RSL ANZAC Village, Narrabeen, where he was a resident.

Born at Northbridge on 10 October, 1922, Mr Williams died aged 99, having survived being captured in Singapore by the Japanese, and being sunk by an American submarine when he was being transported by ship as a prisoner of the Japanese.

A Past President of the Pittwater RSL Sub-Branch, Mr Williams related his wartime experience in 2016.

“My Battalion fought in the defence of Singapore from 08 – 15 February 1942. Our sector was attacked by 50 barges of Japanese infantry on the West coast near the Murai River. After the fall of Singapore we became POWs and were held in Changi Prison.

“On 15 May 1942 we were transported to Burma as labour on the infamous Burma-Thailand Railway, where I served with ‘A’ Force for two years. Initially, I was worked knapping stone as road base for Mergui airfield. What followed was over a year of hard labour on the railway construction.

“Due to labour shortages, a lot of the fittest POWs were to be transported as ‘Number 1 Japan Party’ to Japan. We travelled overland by rail through Cambodia, then by small boats to work at Saigon [Vietnam]. We were then shipped overland again, back to Singapore, as boats couldn’t depart Saigon due to Allied submarine activity.

“On 06 September 1944, 1,300 of us were loaded on the ‘Rakuyo Maru’ for the journey to Japan. However, on 12 September 1944, our ship was torpedoed and sunk by a US submarine, unaware that POWs were onboard. While in the water we were also depth charged.

“My Navy mates told me to lie on my back, cross my arms and absorb the shock through my back, which I did. We treaded water for 24 hours, after which we made a makeshift life raft that we floated in. This saved us from being machine-gunned like a lot of the POWs in the actual Rakuyo lifeboats.

“Three days later, we were picked up by a Japanese corvette and ultimately taken to Hainan Island for processing. In addition to a year of barbaric hard labour in Japan, I also survived the firebombing of Tokyo and Yokohama by our Allied bombers.

In recent years, Mr Williams has campaigned for greater recognition of POWs who died at sea during World War II. Just last week, he was informed by Pittwater MP Rob Stokes that grant funding had been approved by Minister for Veterans David Elliott for a memorial to be constructed by Northern Beaches Council at Mona Vale Headland. At the opening of the new Mona Vale Surf Life Saving Club building on Saturday, 04 June, the day Mr Williams passed away, Mr Stokes acknowledged the history of the area and paid tribute to Mr Williams and his fellow POWs, who died in the sinking of Japanese ships and did not make it back from the war. 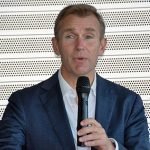 “The Mayor and I are going to visit a guy called Wall Williams who’s a member of Pittwater RSL Sub-Branch, who is 99. Wal is the last survivor of a Japanese prisoner of war ship that was sunk 80-years-ago, next week.

“More than 2,000 Australian prisoners of war and civilians were drowned when an American submarine didn’t realise it was a troop ship and accidentally sunk it. Northern Beaches Council is going to help contribute to a memorial on Mona Vale headland,” said Minister Stokes on Saturday.

Learning of Mr Williams’ death, a saddened Minister Stokes said, “Wal Williams was a decent, courageous, humble and funny man who represents an incredible generation of Australians. I will never forget him.”

Mr Williams came from a military family, his father served in the Light Horse, and his sister joined the Air Force during the Second World War. He was an excellent swimmer, winning state championships, which he credited for his ability to stay alive when the ship he was on was torpedoed and he had to tread water for 24 hours.

After the war, Mr Williams found work in Papua New Guinea for a few years working on boats. When he returned to Sydney he met his wife Helen, and became an auctioneer. 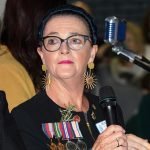 “He was a hero and inspirational to me. He was a great mentor and a great friend,” shared Ms Carter.

Mr Williams was awarded a Medal of the Order of Australia (OAM) in 2021, for service to veterans and their families.

After the passing of his late wife Helen, Mr Williams leaves behind his son Neil, along with two grandsons, Robert and Nicholas, as well as one great grand-daughter, Sophia.

A funeral service will be held at 10.00am Tuesday, 14 June, at the War Vets Chapel, followed by a wake at the Gallipoli Centre from 11.30am.