Police have confirmed they remain on the hunt for a fugitive Northern Beaches man wanted for an alleged international drugs importation.

33-year-old Mostafa Baluch remains on the run, wanted by police following a breach of bail on Monday, 25 October, when he removed an ankle tracking bracelet and disappeared. He was last seen at Pittwater Road, Bayview, just before 10.30pm that evening.

According to head of the State Crime Command Organised Crime Squad, Detective Superintendent Rob Critchlow, information continues to be shared with police that is leading to further arrests. 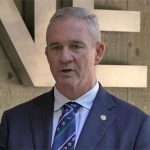 “These enquiries were aided by assistance from the public. We believe that these houses are linked to the person we’re searching for and his associates. What we’re finding as we chase this man, to bring him back to justice, is that we are identifying a whole range of criminal offences and a wider criminal group.

“As we indicated early last week, we will be putting enormous pressure on those associated with this man and his family to seek his return to custody,” said Det Supt Critchlow.

Det Supt Crichlow said that it was possible Mr Baluch had been at the premises searched, with cars linked to him identified at the addresses searched.

“We know for a fact he was taken in one particular vehicle to an area of Northern Sydney where he was picked up in another car. That is linked to these addresses last night.

“The Range Rover drove him from the Northern Beaches, during the journey he cut off his bracelet. He was dropped off in a street in Northern Sydney, and then from that street was taken in another car, which we now know the rough description of, a dark blue BMW wagon, X3 or X5 model, around the Pymble/Gordon area of Northern Sydney.

“We’ve linked that dark-coloured BMW wagon to these addresses in south western Sydney. The information we have is he’s most likely still in Sydney, but we’re not assuming anything, we don’t believe he has travelled overseas yet.

“We are still quite certain he seeks to flee overseas. We’ve engaged some partners for assistance with that. That’s why we are reaching out again to the public who have been fantastic to this point, to give us any information they can on Crime Stoppers 1800 333 000,” said Det Supt Critchlow.