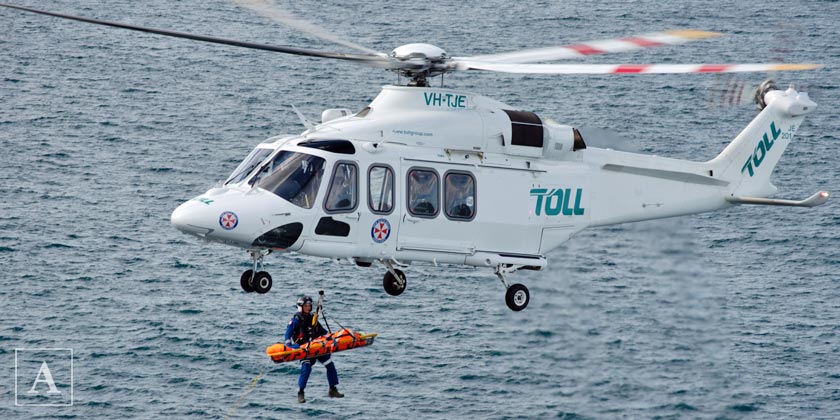 A man has been winched to safety in a dramatic cliff rescue at North Curl Curl today.

Just after 12.00pm today (Sunday, 03 October) emergency services received a call from a man who had fallen onto rocks at North Curl Curl headland, near Molong Street.

Initial reports were that the 47-year-old man had fallen approximately 8m from the top of the cliff, but rescuers on scene have since confirmed he was making his way around the bottom of the cliff from Dee Why and fell approximately 5m when attempting to climb over rocks.

The man was initially unable to call for help due to poor mobile phone reception, but was able to crawl laboriously to a location where he could make a call to Triple Zero (000) for assistance. 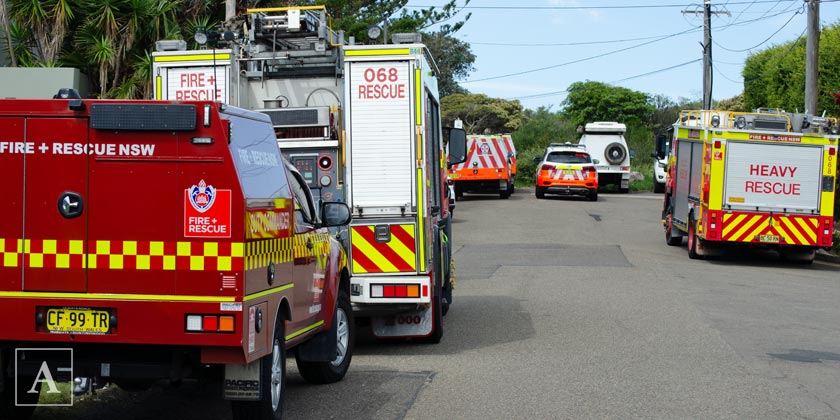 A large number of emergency services teams responded to the incident scene, including NSW Police and the PolAir helicopter, which was the first to locate the man’s position, around 50m north of Molong Street, approximately 10-15m from the water’s edge on a large boulder with 4m drops on each side.

NSW Ambulance had six crews respond including two Special Operations Team (SOT) paramedics, an intensive care vehicle and a general duties vehicle, which happened to have a SOT trained paramedic on duty, the Toll Ambulance Rescue Helicopter and NSW Ambulance Inspector David Lambert, who said the man was fortunate to be able to contact emergency services by mobile phone.

“After the man fell, he spent a significant period of time crawling over difficult terrain to get suitable reception to call Triple Zero (000) for help. Special Operations paramedics and Fire and Rescue NSW accessed the patient initially by abseiling down the cliff face.

“Due to the difficult access, we made the decision to winch the patient to safety with the assistance of the Toll Ambulance Rescue Helicopter. It’s remarkable he didn’t sustain any life-threatening injuries,” said Inspector Lambert. 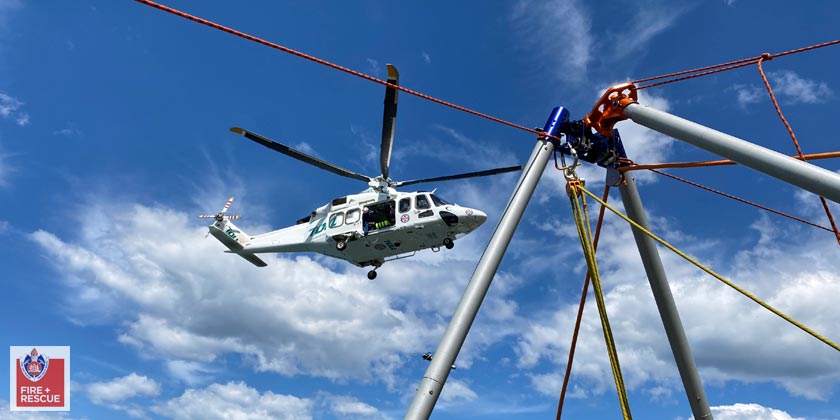 Fire and Rescue NSW responded from Narrabeen, Dee Why and Manly Stations. A team of NSW Ambulance paramedics and firefighters from Dee Why Station attempted to access the man via rocks from North Curl Curl, but were unable to reach the incident scene on foot because of impassable terrain.

“We were doing a drill this morning and we ended up getting called out. We had our Arizona Vortex A-frame out and were practicing with it. We went out for a coffee and to get some lunch, when we got the call,” said SO Butler. 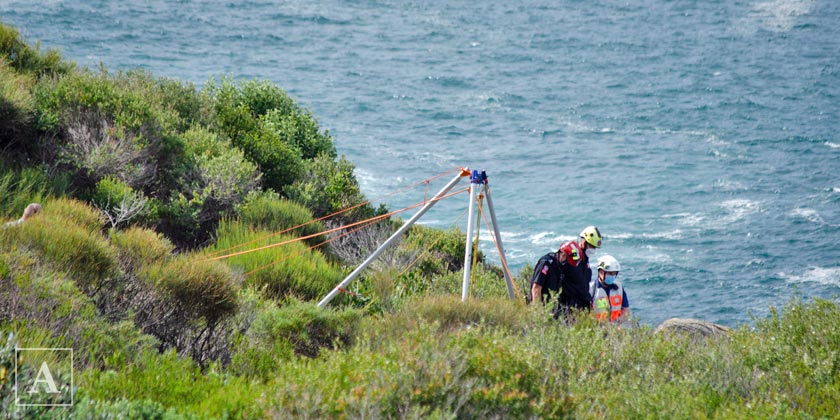 According to SO Butler, when they arrived and set up the equipment so they could work over the edge of the cliff, they found the man in surprisingly good condition.

“We set up some edge control so we could lean over the edge and he was down there sitting on a rock. He didn’t look overly injured at the time. We sent one of our crew over straight away and did the initial access, followed by a paramedic about 15 minutes later.

“He looked good when we looked in from above, he gave me a thumbs up and at one stage even stood up on the rock when the Special Operations paramedics were lowered down to him and they stabilised and secured him,” said SO Butler. 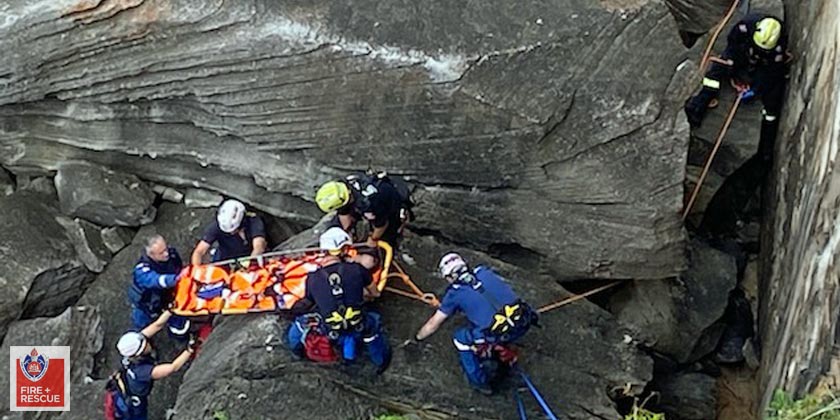 After finding the man in what appeared to be reasonable condition, the initial plan was to haul him up via a rope rescue, but paramedics reported the man’s condition had begun to deteriorate, so it was decided to winch him up to the Toll Ambulance Rescue Helicopter which landed in nearby Surf Reserve after lowering a critical care doctor and a critical care paramedic down to the man by winch. 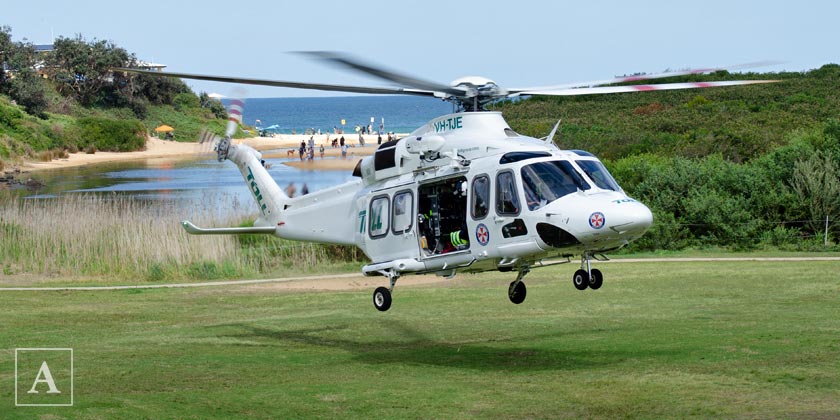 “We set up to package him and use the Arizona Vortex to haul him up but the paramedics made the call based on his condition to winch him out with the helicopter. We ended up putting two firefighters, three NSW Ambulance Special Operations paramedics and two of the helicopter crew down with him,” said SC Butler. 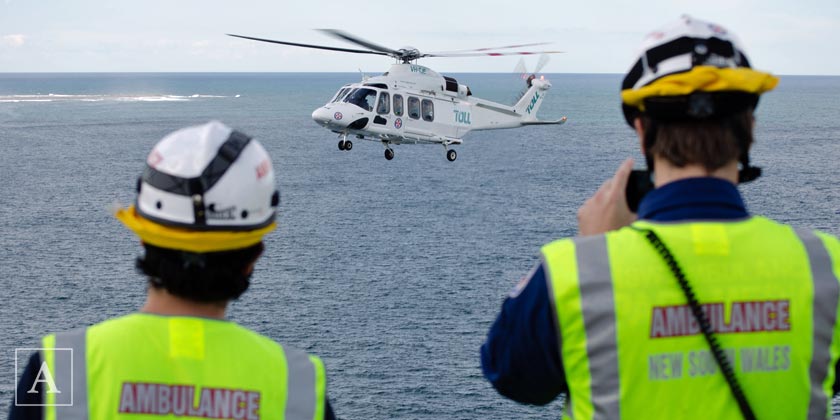 The man suffered injuries to his back, abdomen and ribs as well as sustaining multiple bruises and abrasions, but they were not considered life-threatening. Paramedics took some time to treat the man at the scene and prepare him for winch extrication, which was completed by the Toll Ambulance Rescue Helicopter around 4.00pm (main image). Watch the video of the man being winched from the rocks below.

After retrieval of both of the Toll Ambulance Rescue Helicopter medical team and their equipment by winch, they flew the man directly to Royal North Shore Hospital in a stable condition.

The remaining firefighters and paramedics ascended from the base of the cliff via the Arizona Vortex rope system, which had remained ready for a haul out. All emergency services were clear of the incident scene shortly after 5.30pm.

Video of firefighters being lowered down to the injured man.

For more on this story, our friends at Manly Observer have since spoken with the man who fell and was rescued.