Northern Beaches Police are hunting for a man who has been trying to lure children with lollies.

Northern Beaches Police Area Command yesterday (Monday, 07 June) issued a statement that they were looking for a man of a similar description connected with two incidents involving children at Manly Vale on Saturday, 05 June.

In the first incident, two 6-year-old boys were playing in the front yard of a home at Lovett Street, Manly Vale at around 3.30pm when the man called out to them from a vehicle. A parent of one of the children reported on social media that the two boys ‘were approached by an older man in a white car who offered them lollies to try to entice them into his car’. The children ran away from the man, into the house.

In the second incident, a girl who was walking nearby at Campbell Parade, Manly Vale at around 7.00pm reported a man of similar description to the earlier incident behaving in an intimidating manner toward her.

Both incidents were reported to police yesterday (Monday, 07 June) with the man described as being middle-aged with grey hair, driving a white vehicle with a circular sticker on the back. The man was not reported to have touched the children in either incident. 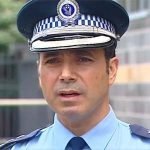 Northern Beaches Police Area Command Crime Manager, Detective Chief Inspector Michael Boutouridis said police were investigating whether the two incidents were related, but were also aware of other reports on social media that had not yet been reported to police.

“The description doesn’t go beyond a grey haired man in a white car with some sort of circular sticker on the car. That’s the strongest and best description we’ve got so far. Bear in mind that’s from a couple of 6-year-olds, so it’s pretty good. The other one was a man who stared at a girl. There was no engagement beyond that.

“My intel staff are telling me there are posts on social media that would lead us to believe there are more incidents but they haven’t necessarily been reported to the police.

“People shouldn’t stop at adding posts on social media, if there’s a child approach and a potential paedophile out there, they should be calling the police. Whether it’s a week old or a day old it doesn’t matter, we’ll do something about it,” said Detective Chief Inspector Boutouridis.

Warnings have been issued by parents of children in participation sports, with reports of similar behaviour at the John Fisher Park netball courts at Curl Curl and a man of similar description at Tunks Park, Cammeray and at Willoughby attempting to lure children away.

In late April, warnings were issued for parents at Mosman Public School for an unknown person in a white vehicle approaching a student who was walking to school.

Detective Chief Inspector Boutouridis reiterated his call for witnesses to any event involving approaches to children to come forward to help police build a picture of any patterns of behaviour.

“At the very least we can collate all this information and identify patterns of behaviour. We might have the one offender responsible across both Police Area Commands. We certainly don’t have proof of it. In order to build that brief we need more information.

“To build that information base we appeal to witnesses, parents in particular, to come forward with their children who’ve had this type of encounter. We are always concerned and our interest is heightened when children are approached by adults and there may be something sinister at play,” said Detective Chief Inspector Boutouridis.