This afternoon (Sunday, 16 May) around 100 people gathered at Manly Life Saving Club (LSC) to celebrate 40 years of female involvement. Of the many notable women in attendance who are affiliated with the club, four were guest speakers who shared their fondest memories of the club. 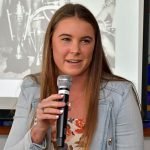 Piper Harrison said she had been involved in Manly LSC since she was 5-years-old and while it was like family, she particularly enjoyed the competitive aspect of the club.

“I remember when I was probably about under 12s, I was in Manly’s all-age board relay team. It’s an event in Nippers where the club selects one paddler from age groups between under 9s to under 14s. It’s a mixed event but there’s a requirement for at least one female competitor. Manly that year had three females in our team and we won the event. Most clubs just had one female, the minimum requirement. One boy came up after the event and said, ‘Are you girls on steroids?'” said Ms Harrison. 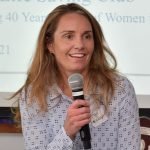 Ruth Kelly who was the first female Club Captain of Manly LSC recalled her time competing but felt the strongest bonds were in team camaraderie.

“We believe in each other. Once you throw that sky blue on, you are invincible. Many times I have been on the beach thinking I don’t want to go out but I can’t let the team down. It’s all about the team. We can do anything ladies and don’t let anyone tell us any different,” said Ms Kelly.

Olympic gold-medallist and former Captain of the Australian Women’s Water Polo Team Deb Watson OAM recollected an amusing moment as one of her favourites. 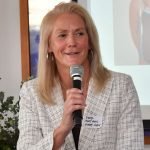 “At one Manly carnival they decided to do a mixed ski race. None of us had ever been on a ski before and we thought, it can’t be that hard can it? My partner was Greg Bennett. He doesn’t say very much.

“We line up and Greg says, ‘Just get on and don’t worry about paddling, I’ll paddle’. The starters are in the water and there’s a massive crowd around. They start us and I got on and fell off the other side. I get back up and Greg says, ‘Get back on’ and I fell off the other side. That went on for a couple of goes and I got the giggles. So did Greg’s peers, who were around laughing at him and he says, ‘It’s not funny’.

“He said, ‘I’ll get on first’. He got on, then I got on, and we both fell off. It just went on and for him it was an eternity. Eventually when everyone else had reached the first buoy, the judge got the whistle and it was the only time Greg Bennett has been whistled off a beach. I don’t think he’s forgiven me,” said Ms Watson as the room echoed with laughter.

One of the original women in life saving in 1980, Denise Elder was a member at Bronte SLSC before moving to Manly LSC. 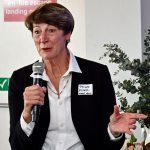 “When I first got my Bronze in 1980, the first IronWoman event ever in the southern hemisphere was on, so for some reason I said I’d give it a go. I asked my mentor when they were going to shorten the course and he said, ‘They’re not going to bloody shorten the course for women’. I ended up doing it and didn’t come last, which was fantastic.

“A couple of years later I was approached to stand in for the Treasurer of Bronte who had taken unwell. I was CEO of a private hospital at that stage, so I agreed. I was the first woman on the executive. I was sitting there quite nervous and all of a sudden this bloke said, ‘What’s the effin sheila doing here?’

“I was wondering if I needed to stand up and assert myself when the President said, ‘Gentlemen we have a woman in our midst, watch your language’. It lasted about 5 minutes after which I was accepted as one of the boys. I was Treasurer for a couple of years and never looked back,” said Ms Elder.

Manly LSC Secretary Victoria O’Halloran, who organised the celebration of 40 years of women in life saving, said it was important to recognise the milestone and the women who had achieved it. 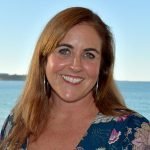 “The 1979/80 season in NSW represents the first year women were allowed to receive a Bronze Medallion in surf life saving, which is the entry level requirement to be an active patrolling member of a surf club. Last year actually marked 40 years but we couldn’t have the celebration due to COVID, so we’ve done it now.

“We’ve got representation from all of the generations. It’s about coming together to celebrate what women have contributed to Manly Surf Club. It’s important that we have recorded some of those stories.

“Women have always contributed and Manly has always had very strong female competitors. Today was about recognising them but also about the women who have contributed behind the scenes in administration. We could only have 110 people attend today but that was nice because it’s our 110th anniversary,” said Ms O’Halloran.

Last October, Member for Warringah and former Manly LSC member Zali Steggall OAM called for funding to upgrade the building. Ms O’Halloran said an upgrade was needed and they were hopeful that funding would come.

“We are in line for redevelopment. We have secured some of the funding and are waiting for some more to come through. The hope is in the next 3-5 years we will have a club that befits the iconic location that we hold in Manly and the success of the club. If I took you to the women’s change rooms your hair would stand on end.

“The facilities are appalling for the number of members we have and the services we provide. We operate longer periods of the year and longer hours, so it would be good to have a club that reflects that and gives us facilities to do our life saving,” said Ms O’Halloran.

Manly Life Saving Club conducted a series of interviews with female members to celebrate the 40th anniversary of women in life saving.