Two of Australia’s leaders on waste and recycling met on the Northern Beaches this week.

During the meeting, they discussed the challenges of recovering usable materials from waste streams, and the opportunity to provide sustainable and affordable inputs to the manufacturing sector. Prof Sahajwalla’s research and development efforts saw the commercialisation of Green Steel, using recycled tyres instead of coal, now used by Newcastle steelmaker Molycop. 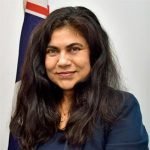 Prof Sahajwalla has now turned her attention to the creation of ‘micro factories’ that can take waste streams and create Green Ceramics and plastic filaments for 3D printed custom manufacturing.

“With Minister Trevor Evans, Jason Falinski and myself, it was great to hear from Northern Beaches residents how passionate people are for recycling and understanding this is a fantastic opportunity. We’ve seen this is no longer a problem if we get it right, we can convert it into an opportunity.

“With micro factories and micro manufacturing it is absolutely possible to 3D print parts and components where the feed stock is coming from waste. I use some of those examples from our work and that’s the important shift in the mindset, where waste plastic goes from being a problem to a resource.

“When you look at some of the technologies we are developing at UNSW, effectively using our micro factory technology to do it in a decentralised way so that you can convert those difficult plastics. Ironically, the difficult plastics are the ones that can be quite useful in manufactured goods.

“The other critical part of this conversation is government funding that goes into supporting science and commercialisation.

“The State Government has provided funds through the NSW Office of the Chief Scientist and Engineer for commercialisation of our Green Ceramics, made from waste glass and textiles. This support has set up the first Green Ceramics micro factory outside UNSW with an industry partner.

“At the Federal level, we have a grant through the Australian Research Council which is about recycling waste batteries. They contain very important materials. That’s about creating new science for micro recycling and addressing an important issue. When you’ve got all these micro materials in batteries that are packed in together you’re not going to be able to do that with a standard recycling machine. We have developed an ability to selectively synthesise the materials we want through a process of isolation that gives us solutions that are fit for purpose.

“That grant lets us do world-leading science. That’s an important piece of the puzzle as our products evolve and become more sophisticated. We are now moving into the domain where we have to recognise how we solve the problem in a holistic way. We cannot say it’s somebody else’s problem,” said Prof Sahajwalla. 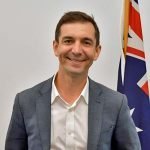 Federal Assistant Minister for Waste Reduction and Environment Management Trevor Evans said that China’s ban on the importation of waste had changed the landscape for recycling.

“We had some issues with materials being transported past recycling facilities to take advantage of differences in waste levies.

“There was a job to be done of harmonisation and national leadership. The first national recycling laws we put through the Parliament last year did a number of things, one of which was to say these resource streams cannot be sent overseas when they have not been processed and sorted because there’s a risk of contamination.

“Waste has traditionally found the cheapest path, and there’s many other countries out there that have presumably stepped into the breach when China stopped. The PM said at the time, ‘It’s our waste, it’s our responsibility.’

“That’s the ethos behind those laws. We couldn’t just turn the taps off without finding suitable homes for that waste here in Australia. We needed to create new facilities with state of the art equipment right around the country.

“We created a fund with the agreement of the states and territories called the Recycling Modernisation Fund. The Federal Government puts in a dollar if the states match it out of their waste levies and if industry also then match it.

“This has given birth to close to a billion dollars of recycling investments that are now happening right around the country in every state and territory. Those are new state of the art facilities that can do recycling at a fraction of a cost of the old methods that bring about commercial outcomes that used to be challenged.

“There’s a beautiful partnership emerging where key manufacturing strengths for Australia are supported by recycling and remanufacturing from the materials we are keeping on shore and turning into inputs.

“The reason that science, research and innovation is so important for the Federal Government is that we have recognised that when you open the bins and look at waste in its granular detail, waste streams are as complicated as every product on every shelf and every input in every industry.

“We know the government doesn’t have the capability to play the perfect matchmaker role for every waste stream. We have to create an ecosystem of policies, incentives and markets that will help empower the people who make, design, produce, distribute, recover and recycle these materials.

“It’s about empowering people to find more sustainable solutions to recover resources at the end of their products life. That involves a lot of science, research and finding new inventions for problems that don’t have solutions yet. That’s the importance of Veena [Prof Sahajwalla] and her work, which is why we’ve given her funding,” said Minister Evans.

Northern Beaches company Unsurpassed Australian Grown based at Collaroy has been working on ways to turn organic waste products into valuable agricultural inputs.

Prof Sahajwalla has recently been the subject of an ABC Australian Story program (video below) which shows the work that [email protected] has been working on to turn waste into a value stream.