A new book details the history of the Randell School of Dancing.

Operated at Denison Street, Manly from the 1940s and at Condamine Street, Balgowlah from 1957 until it closed in 1987, the Randell School of Dancing was run by husband and wife team Peter and Valerie Randell.

The book ‘See you at Randell’s’ is named after the popular catchcry of Northern Beaches teenagers who attended the Balgowlah venue over 30 years of operation.

Co-authors Anne Stephenson and Jenny Brosnan say the book is a history of Randell’s with a ‘good dash’ of other local history as well. They detail how the proprietors Peter and Valerie Randell were at the forefront of Ballroom Dancing in Australia and the Pacific region. The dance school is understood to have been the inspiration for the 1992 Australian film, Strictly Ballroom.

In the early 1950s, social norms of dancing and dating saw the dance studio become a social magnet for young people from Manly to Palm Beach under the supervision of Peter and Valerie Randell. 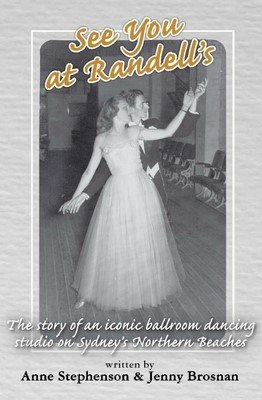 The book combines the story of the dance studio with other contemporary Australian history. It also contains a collection of wedding photos of the couples who met at the Randell School of Dancing.

Now in her nineties, Mrs Randell of Collaroy still loves ballroom dancing, and would still be dancing herself if it were not for debilitating arthritis. She maintains her longstanding ties with the dancing fraternity and still judges occasionally. She is a life member of the Federal Association of Teachers of Dancing (FATD), the longest established dance teacher association in the Southern Hemisphere. Mr Randell passed away in 1997, age 71.

Mrs Randell was awarded an OAM in The Queen’s Birthday 2020 Honours List for her services to dancesport. She said her greatest honour was helping young people mature and grow.

“Teaching all these wonderful people who came in aged 15-16 and did not leave until after they married. I felt very privileged to help them a little along life’s path,” said Mrs Randell.

Co-authors Anne Stephenson and Jenny Brosnan are planning an author talk on Wednesday, 05 May, from 6.00pm – 8.00pm at Seaforth Bowling Club. Those interested in attending or purchasing the book can contact the authors via email at [email protected].