His two hobbies came together on Thursday (11 February) when he was surprised with a bravery award by Mackellar MP Jason Falinski while performing his duties as the pitching coach for the junior girls team at the playing fields at Abbott Road, Curl Curl.

Sunday, 15 November 2020, Mr Haronga saw a paraglider crash into the ocean at Warriewood headland while rock fishing. He dove into the water and has been credited with saving the man’s life.

“He asked me to give him a hand to take off. The wind was quite strong so I helped him set the paraglider up so it didn’t blow across the road.

“I was feeding the fish, not catching them. I bought some new Daiwa gear and thought I’d try it out. I went to a spot I normally go to. I went down and started fishing for 20 minutes. Jos actually flew above me and was flying around when the wind stopped. I was changing my bait and looked over and he was in the water and his parachute was coming down,” said Mr Haronga.

Mr Haronga didn’t hesitate, abandoning his gear, rushing to help using local knowledge of the headland to get to the man’s location in under a minute.

“Where he crashed there’s only one way down. Two of us ran down but the other guy overshot and came back to see where I went down. I could tell he was in big trouble. I don’t know what would have happened to him if I wasn’t there.

“When I ran down, the parachute was actually on the rocks. I thought I’d just run down and grab it. By the time I got down to him, it was out 10m. Within 40 seconds he went from on the rocks to 10m out. I just dived in. I backed my swimming ability. I knew it was a critical situation and I had to give it a go.

“My head was so clear I was surprised. My head being so clear was weird. Before I got in I said, ‘Just relax, don’t panic’. I was thinking about my surroundings,” said Mr Haronga.

As Mr Haronga reached Mr Bots, who was increasingly tangled in the webbing of his parachute cords, he decided to grab the parachute to drag him back to the rocks in case the man panicked and they both drowned.

“As I started swimming in he started to panic. He told me, ‘I don’t want to die’. I knew it was one of those kind of situations. Had the swell been any bigger I don’t think the outcome would have been the same. It was only 10m but it was the longest 10m I’ve ever swum.

“He did panic and he talked to me to save him. He said, ‘Please save me’. It felt like I was getting nowhere because the paraglider was full of water and was so heavy. As I kept trying, the shape of the paraglider full of water started to get thin, change shape and move slowly,” said Mr Haronga.

As he began to make progress, Mr Haronga faced two challenges, getting back to the rocks, then getting back up onto them safely.

“I looked up and thought what I was going to do once I got to the rocks. Luckily there was some other people there. I passed the parachute up to them and struggled to get out of the water. I was pretty spent. I had nothing left in the tank, I had emptied it.

“I climbed up and whatever I had left I tried to help pull him up. Fishing on the rocks, when you catch a fish you learn to use the waves to bring the fish in. That’s what we had to do with Jos, wait for the wave, wait for him to get pushed up and then pull him in,” said Mr Haronga.

Having brought Mr Bots back to shore, his rescuers found him completely entangled in the ropes. Had Mr Haronga not jumped in to save him, he almost certainly would have drowned.

“When we pulled him up, he was stuck on the rocks. I was the only one who had a knife there. I had to send someone over to get my fishing knife so we could cut him free.

“The ropes are so strong you can’t snap them. I didn’t realise until we got him out that he couldn’t swim because his hands and legs were tied up in the cords,” said Mr Haronga.

As media interest focused on the scene, Mr Haronga wanted to make a quiet escape from attention.

“As soon as I saw the camera I skipped it, I didn’t want anything to do with it. I called my wife. I was crying in the car. I drove home, I stopped half way to gather myself and drive again. It was heavy.

“After that incident, I think it’s made me a better person. It’s changed the way I think about other people and it’s made me better. Driving around Sydney for work can be nuts, but now I don’t worry about it,” said Mr Haronga.

According to the head coach of the Sugar Gliders, Julian Edwards, Mr Haronga’s actions are entirely consistent with his character and self-effacing nature. Mr Haronga has no children in the team, donating his pitching experience and time to the team.

“I played top level softball up until I was 21. I moved here [from NZ] and didn’t know many men’s softball teams. I love the game so much I donate my time for free. It feels like it’s my duty to give back after people took the time to coach me,” said Mr Haronga.

Mackellar MP Jason Falinski told the young team that he was there on behalf of the Australian Government to recognise their pitching coach for his extraordinary actions on that day.

“It goes to show that heroes come in all shapes and sizes. What your coach did is an extraordinary thing. A man is alive today because of what he did. I know he’s setting a great example for you,” said Mr Falinski. 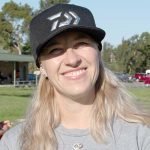 In a remarkable symmetry, one of the parents in the Sugar Gliders team Michelle Catterick works with Daiwa, makers of the new fishing gear Mr Haronga had abandoned during the rescue.

“It was very lucky you are an avid fisherman and you were there at the time. I spoke to my employer Daiwa, who had seen your story on the news. Today, on behalf of Daiwa, the girls will present you with some equipment in recognition of your bravery,” said Ms Catterick as the team lined up to present Mr Haronga with around $2,000 of new fishing gear.