A woman and boy were seriously injured when their golf cart rolled at Scotland Island.

Around 7.10pm yesterday (Thursday, 14 January) a 54-year-old woman and a young boy approximately 10-years-old were driving a golf cart at Thompson Road, Scotland Island when it rolled around 2m down an embankment.

Emergency services including Scotland Island RFS, NSW Ambulance paramedics, the NSW Toll Ambulance Rescue Helicopter and NSW Water Police responded to the scene and found the woman, who was the driver, and the boy both trapped by the vehicle.

It took approximately three hours for both patients to be stabilised and to be extricated from the scene. NSW Ambulance Director of Helicopter Operations Chief Superintendent Cameron Edgar said the early response of the local emergency services was critical.

“Being in such a remote location it was great to have our community first responders on scene first. It was an unbelievable team effort from all emergency services,” said Chief Supt. Edgar.

The boy suffered serious pelvic and leg injuries and was winched to a Toll Air Ambulance which had been dispatched to the scene despite nearby storm activity. At 10.30pm he was flown to Sydney Children’s Hospital at Randwick in a critical condition.

The woman suffered lower abdominal and back injuries, she was transported by water and road to Royal North Shore Hospital in a stable condition at around 11.45pm. 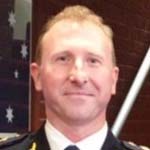 “The young boy was trapped for almost 45 minutes, he suffered some extensive injuries to his pelvis. It was a tough environment with limited daylight to work with. We had to continually monitor the weather conditions with a storm front close by.

“It was a very difficult extrication. The NSW Ambulance critical care paramedic, doctor and flight crew did a fantastic job to winch the patient to safety in darkness,” said Chief Supt. Edgar.

Some residents of Scotland Island have called for a helicopter landing area or pontoon to help with medical evacution in emergencies.