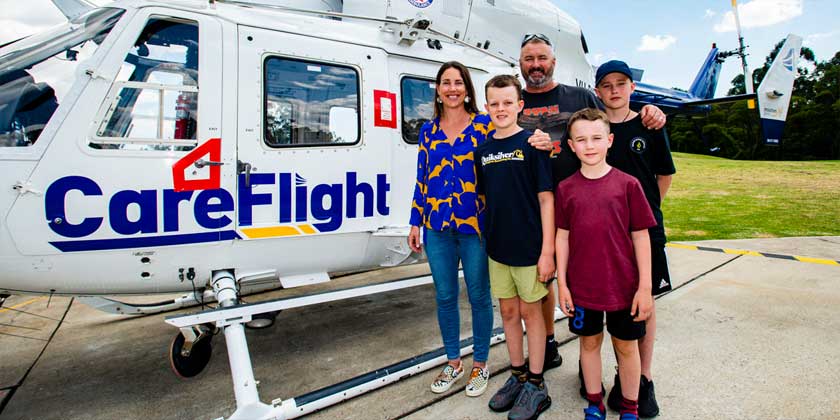 On Sunday, 06 September, 12-year-old Lochie O’Fee from Davidson remembers going outside to jump on the trampoline, but has no memory of what happened next.

“It was Father’s Day and I went downstairs to play on the PlayStation, then I gave dad his present and that’s all I can remember,” he said.

His mother Brooke says she told Lochie to get off the PlayStation and go play outside, but he soon came in, complaining of a headache.

“It got worse, and we told him to go sit down on the couch. He started crying and screaming, and holding his head,” said Brooke.

Lochie was not breathing and began to vomit. The training Brooke does every six months to certify in CPR for her child care job kicked in as the Triple Zero operator relayed instructions over the phone.

“You need more support if you are going to start doing CPR,” said Brooke. “They always say the more people the better, and four’s a good number to do it.” So she sent her other sons for help.

Lochie’s brothers, Jack (13) and Leo (8) found their older cousin Jackson, to get help from Brooke’s sister Amber and brother-in-law Shane, who live next-door.

“They came over to try and help keep him stable,” said Todd, reflecting on the moments before emergency services arrived, “You do what you can until the police and help arrive.”

As Lochie started breathing again, his parents heard the approaching sirens and the sound of the CareFlight helicopter pass over the house.

Dr Alex Doig, who was on the CareFlight rapid response helicopter, said they landed at Lionel Watts Oval, Belrose.

“It was myself, Dr Chris Cheeseman and a paramedic as well. The Police cleared our landing zone and had two Highway Patrol cars ready to go, with seats cleared so we can get all our gear in. They knew what they were doing. They got us there to the scene very quickly,” said Dr Doig.

Meanwhile, NSW Ambulance paramedics had arrived at the O’Fee home and taken over care from Lochie’s parents. When the CareFlight team arrived under Police escort, they were able to get more information from Brooke and Todd.

“We were able to have a chat with them and get a history that he may have had a fall and hit his head. He complained of a headache and then he collapsed,” said Dr Doig.

“There’s some types of injuries that people have a period where they’ve got a headache, after a head injury, and then they can collapse after that. So our working diagnosis was that it was a head trauma.”

Todd says at this point although there was a lot going on, the emergency services were all working together as the CareFlight doctors tried to get medication into Lochie.

“They were trying to get a cannula in, but he woke up and ripped it out of his arm. He was unconscious but coming around and yelling. Then they had to drill a hole in his arm with a drill. They put a plug in and put some drugs in to knock him out so he wouldn’t know what was going on,” said Todd.

As Lochie was being prepared for transfer by CareFlight, the team informed his parents they would be going to The Children’s Hospital at Westmead.

“They said to meet us there,” and then checked, “Are you alright to drive?” said Brooke.

“We took off to Westmead,” said Todd. “We drove past the park when the helicopter was taking off.”

As they flew Lochie to Westmead, the medical team began to question the initial assumption of head trauma.

“Most of the other features were consistent with a bleed in his head, which is ultimately what he had, it just wasn’t traumatic in origin.”

It turned out Lochie had an aneurysm, which are uncommon in children. An aneurysm is a weakness in the wall of a blood vessel, which when ruptured, can rapidly be fatal. Time was critical. 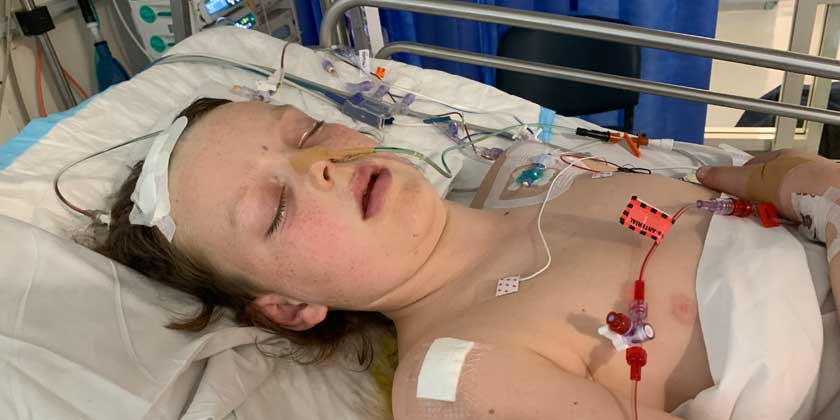 “When they got him to hospital, they did an X-ray to make sure his head was alright, to make sure there was no fractures,” said Todd.

“They realised it wasn’t a trampolining accident. He didn’t smash his head on anything, he was just jumping around. They did a scan and realised he was bleeding inside the head.

“They drilled a hole in his head to relieve the pressure by putting a brain drain in. They did more CT scans and an angiogram up through the arteries and found out where the aneurysm was.”

The next 24 hours was a tense time for the family as neurosurgeons located the problem and came up with a plan to fix it.

“They found it, and then they had to figure out how to fix it because it was in a bad spot, wrapped around the brain stem. They thought there was a blood vessel coming off the aneurysm, feeding the brain stem. If that was the case, he could have died so the brain surgeon didn’t want to go in,” said Todd.

“They sat us down and said we’ve come up with a plan. We’re going to go up through the arteries and fix it internally. They managed to get a camera up and have a good look and found the vein wasn’t coming off the brain stem, it was just leaning against it and going past it.

“So, then they dropped some coils off, which is a reasonably new way of fixing aneurysms. They put the coil in the aneurysm and that makes it clot over and grow a new wall of the artery.

“He had a couple of scans after [the operation] and a couple of angiograms during that follow-up over the next couple of days. Then he spent a week in intensive care.”

Looking back at videos the family took while Lochie was recovering in hospital, Brooke says it is remarkable how quickly he improved.

“To see the videos, it’s remarkable at how well he was doing every day, just getting so much better.” 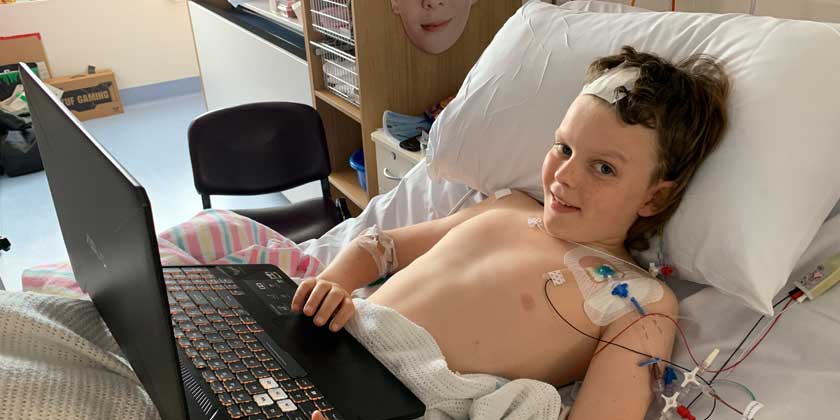 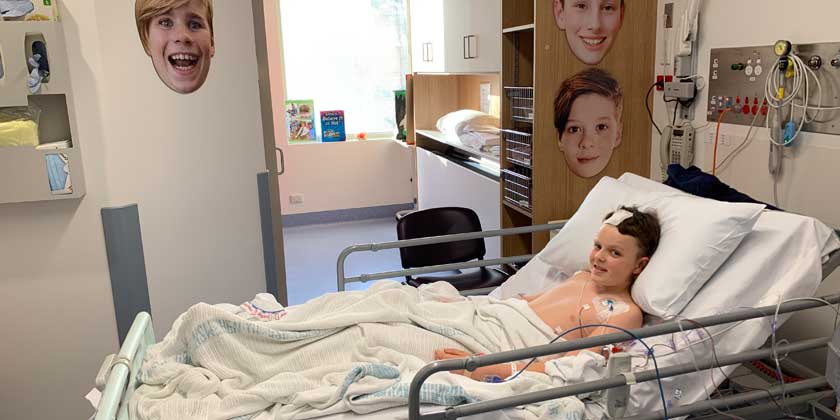 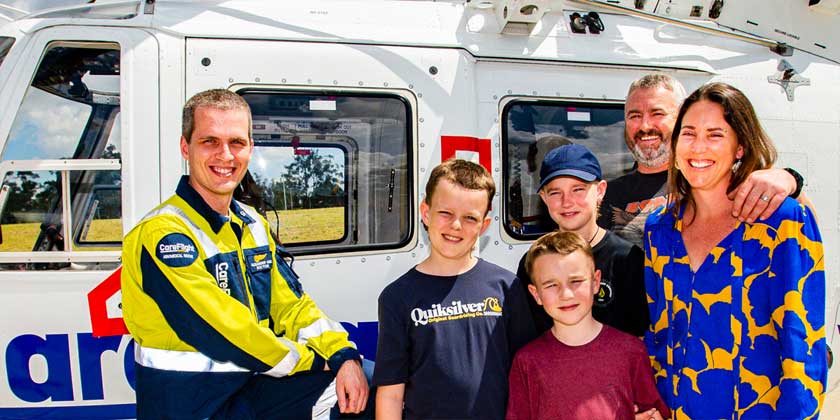 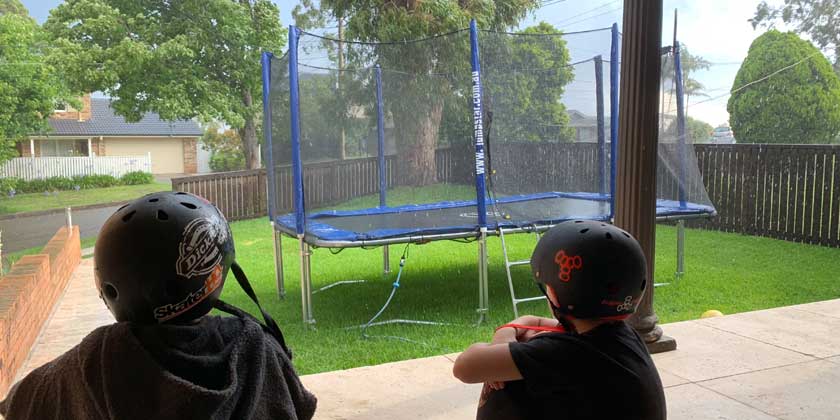 Lochie says he is feeling good now and even went back on the trampoline.

“Sometimes I’ll get an occasional headache. After I came out of hospital I got pretty bad headaches. Then it got a bit better, and after that first week, it went away.”

While contact sports are not in Lochie’s future, his dad says apart from watching his head, things should gradually return to normal.

“Really it’s just working our way through. There’s good follow-ups. They’re going to do another angiogram and CT’s to keep an eye on him,” said Todd.

Lochie’s mum Brooke says he will need scans every year until he is an adult, and then he will have them every five years.

Reflecting on the events that landed Lochie in hospital, his parents are certain the rapid response of emergency services saved their son’s life.

“If it wasn’t for CareFlight and everyone else who turned up when they did, and did what they did, he wouldn’t be here,” said Todd.

“Without them Lochie wouldn’t have been so well, or survived,” agreed Brooke.

Both parents are particularly grateful that CareFlight was there when their family needed the support and have vowed to help the charity in the future through fundraising.

“The work that we do is dependent on other emergency services and the community as well. As an aeromedical charity we rely on community support,” said Dr Doig.

“Our mission is to save lives, speed recovery and serve the community. There’s lots of different ways the community can help. We’d really welcome any support, such as people talking to their employers to become corporate sponsors.”

CareFlight is an aeromedical charity with a mission to save lives, speed recovery and serve the community. They are funded by the generosity of the community and local businesses. If you can support their life-saving work, please donate now.